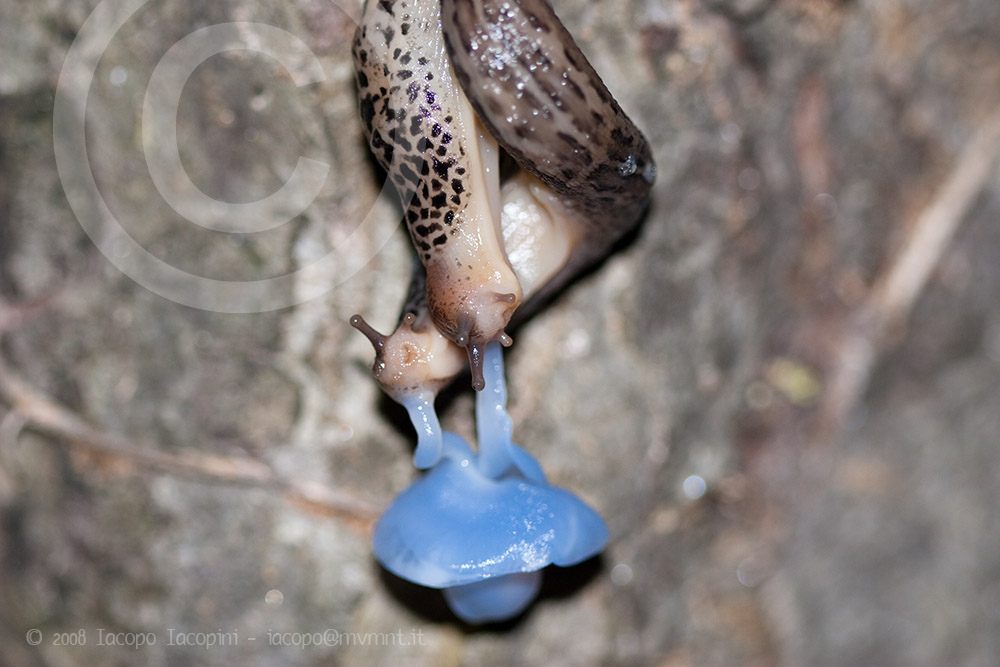 Limax maximus is the scientific name of the great grey slug also commonly named Leopard slug for the disposition of the spots on the body surface. This animal originally native of the continental Europe now is spreading in every garden all around Europe, eastern Africa and in many part of the United States accidentally imported during the years. The great grey slug is a mollusk in the family Limacidae and is one of the largest kinds of keeled air-breathing land slug in the world.

Apparently innocuous and meaningless the slugs could represent an unexpected surprise because of its voracity of plants and vegetables that makes this animal one of the great pests of agriculture and because of some interesting aspects related to its lifestyle. This slug is a predator and can eat other than plants also other slugs or earth worms. These are descendent of the snails that gradually reduced their shells until having it in a small internal organ with the function of calcium salts reserve.

The adult body could reach up to 10-20cm (4-8 in) in length and is mainly composed by water and for this reason they are prone to desiccation and they avoid the sunlight preferring the night time or the rainy days. Slugs are able to produce some kinds of uncolored and translucent mucus. One mucus thin and watery cover the entire body of the animal and is necessary to reduce the loss of water. Another thick mucus came out from the lower part of the body and helps the slug to climb vertical surfaces without slipping down.

There is also a third kind of generated mucus that could be more interesting. This is a slime cord that permit one of the most extraordinary mating technique of the animal world. These cords are used to suspend in the air a pair of slugs of the limax maximus specie during copulation generating a fascinating and surreal acrobatic performance. 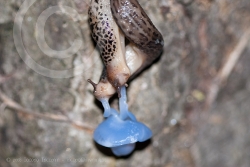 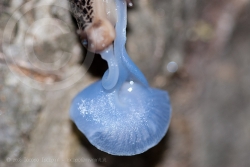 Slugs are hermaphrodites, having both female and male reproductive organs. The court of two slugs consist in hours of circling and licking each other. After this phase the two animals will climb a tree or other high areas to lower themselves entwined together using the slime cords of mucus. From their openings on the right side of the head called gonophores the light blue translucent mating organs are extended entwined together to exchange the sperm creating some unusual flower shapes. From this exchange both of them after about 30 days will be able to lay eggs that will hatch in about a month.

Tell a friend about this gallery
Browse other galleries of this category: Nature & Wildlife
Tags: great grey slug, leopard slug, limax maximus, macro, macro photography, mating, slug, slug mating.
You can follow any new comment to this gallery through the RSS 2.0 feed. You can leave a comment, or trackback from your own site.